on December 30, 2019
Hi! I've wanted to write a bit about how I'm feeling for a while, but I genuinely haven't had the time to do so. I've had a busy few months, since starting back at uni in September, my life has revolved around trying to up my average and writing essays. I discussed September and October here and tbh, this is genuinely the most excitement I really had this semester. I've been really trying to rid myself of all negative energy for going into 2020 - as cringy as that may sound, the past decade has been up and down for me (as most decades are tbh), and a lot of bad things have happened - along with a lot of great things - but I really want to rid myself of all the bad energy, y'know? 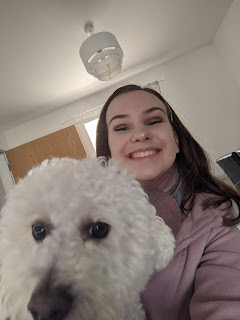 I don't want to go into it on my blog fully, but I've not had the easiest five or so years, and I sort of feel like I carry that around with me, as much as I don't want to be that girl, I think I can be at times. You know, the person that just seems a little emotionally fragile? That's me!

My Cancer self (yes, sorry - my friend got me a book about astrology for Christmas) is the most emotional person to grace the earth, which makes it easy to harbour guilt and negativity. I'm really bad for holding grudges and not being able to fully trust people after they've hurt me for fear they'll do it again, which has burned a lot of bridges for me. And I'm good at brushing things like that off by saying they were toxic, or that I'm so much better off without them - but how true is that really?

There have been moments in my life where the above statements are true - not everyone is good for you and people will take advantage of me, and my incessant need to be liked - but I can also be toxic, and not good for certain people. A major flaw that I have is that I can be really manipulative, a flaw which I've never paid too much attention to until recently. As a very emotional person, I've been told at times when I cry I can manipulate people and make people feel bad, and while I don't think this is true - and no one should ever be made to feel bad for dealing with their emotions in a healthy manner - but I can be manipulative, and I can make people feel bad for how I react to what they are saying.

I suppose the first step to growth is admitting you're flawed, and the fact that I am able to say so, on the internet, where everyone can read my words, says that I am finally at the self-development stage. My friend said this morning that 2019 was huge character development and 2020 is a time for growth, and I would say that's true. I honestly look back at me at the start of the year and think that I wasn't the happiest version of Ashleigh I could be. I wrote this post sort-of summing up my 2018, and while what I had to say about my year was true, I wasn't peak happy. And I've realised that isn't a good goal to have in mind, but I wasn't 100% content with life.

I am also an extremely anxious person - I have so far spent a good six months worrying about getting a place in my Honours year, I spent a while worrying about long-distance with William and I constantly worry about other little things I can't control. When people seem slightly off with me, I overthink every aspect of our friendship, I worry about if I've unintentionally upset them - you name it, I've worried about it. And as much as I can't fully control the anxiousness that is part of my permanent state of being, I can make it better. I'm always going to be a bit anxious, there is always going to be a slight element of worry with everything I do - especially in relation to my degree. I do want to stop being as anxious, and hopefully 2020 is the year where I can make that a reality.

For 2020, a sort-of resolution I have is to become the best version of Ashleigh I can be - I tweeted this morning that I am on a train to England by myself, when I wouldn't have done so a year ago. Travelling to new places makes me anxious and I don't like it, but I've done something I would not have done a year ago and I'm proud of myself for stepping out of my comfort zone.
lifestyle